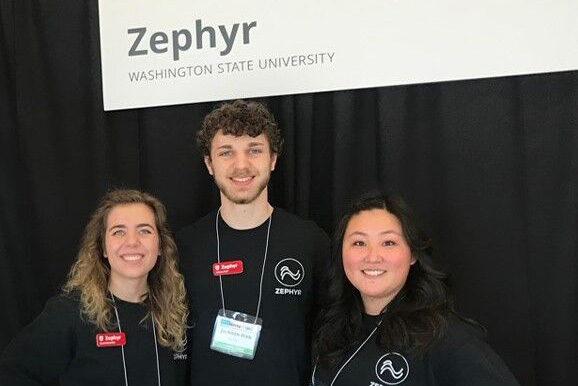 From left, Sarah Schroeder, Jackson Rieb and Katie Lober are the co-founders of Zephyr Mattress Inc., which is developing a mattress designed for people suffering from amyotrophic lateral sclerosis (ALS) or similar physical disorders. (Courtesy photo)

Reported by: Greg Mason of The Spokesman-Review

Theresa Whitlock-Wild has had many nights of sleep interrupted by her husband, Matthew. It’s not his fault.

Unlike most people, Matthew Wild doesn’t have the ability to change positions or adjust the blankets easily if he gets uncomfortable in bed. That’s because he suffers from amyotrophic lateral sclerosis (ALS), or Lou Gehrig’s disease, a progressive nervous system disease that causes loss of muscle control by destroying nerve cells in the spinal cord and brain.

So on most nights, Theresa Whitlock-Wild wakes up to help her husband every one-and-a-half to two hours, she estimated.

Helping people with ALS is the mission for Matt’s Place Foundation, a charity founded by Matthew and Theresa in 2015.

The foundation’s input has since helped guide the scope of a startup idea under development by a trio of Washington State University graduates.

Katie Lober, Jackson Rieb and Sarah Schroeder are refining what started as a senior capstone project into a business for a new type of mattress specifically designed for individuals with mobility issues. They have incorporated under the name Zephyr Mattress Inc.

Existing “smart beds” on the market use sensors that allow the bed to regulate firmness and temperature. Most Sleep Number beds, for example, have an air chamber on each side of the mattress to provide for the preferred firmness levels for couples.

Rieb was reluctant to go into detail on the bed’s features, as Zephyr is working to secure a patent on the technology.

He did say the mattress is designed with 48-firmness zones that automatically adjust using sensors. Users can also manually change a touchscreen interface that will also allow for oscillation programs, such as roll assist, to help turn an individual over.

“With that kind of Sleep Number bed, you only have two pixels whereas you might have eight different pressure points on a single body,” he said. “Increasing the resolution of those zones that can be individually adjusted is something that Zephyr has also done, being able to pinpoint and really cater the experience to the user and have the bed think about what it’s doing and react to the user.”

The idea emerged from a fall 2019 senior capstone project. Rieb, who graduated in spring 2020, said the students were challenged to find a target audience and design something to improve the lives of the audience that technology has not already addressed.

Schroeder and Lober, who were part of WSU’s Harold Frank Engineering Entrepreneurship Institute, came up with the concept inspired by an earlier WSU alum, Steve Gleason.

Following his own ALS diagnosis, the former WSU football and New Orleans Saints standout has advocated for enhanced adaptive technology for patients coping with similar conditions and symptoms.

Lober said WSU bioengineering students at one point had a chance to sit in on a video conference call with Gleason and his team to talk about the challenges people with ALS face in day-to-day life.

“From there, we knew we needed to focus our capstone on helping patients with ALS and their loved ones,” she said.

They learned that while current mattresses are soft by design to avoid pressure points, they’re too soft to the point where ALS patients “would kind of get trapped in them” without any firm surfaces, Rieb said.

“So from there, we kind of saw the need for a dynamic system,” Rieb said. “A sleep surface that could react in real time, adjusting the firmness to the user’s need at that moment. … It’s also about giving back as much independence as possible. That’s a lot of what these technologies are aimed at. That’s definitely our main goal.”

The WSU graduates, who all hail from Tri-Cities, have taken their concept through the proverbial ringer over the past two years through entrepreneurial competitions.

The first was in early 2020 with the University of Washington’s Holloman Health Innovation Challenge.

Rieb said they used the feedback to later place second in the Northwest Entrepreneurship Competition, an annual business plan and pitch contest with colleges and high schools from Washington and Idaho, and then first in Life Science Innovation Northwest.

Team Zephyr took home around $20,000 to $30,000 in prize money during last year’s entrepreneurship circuit, Rieb said, using much of the capital they have to refine the mattress design.

“We’re definitely monetarily confined at the moment,” he said, “but that’s something that we had a lot of good connections with and people helping us out with writing those (grant) applications, making sure they’re getting seen by the right people and moving forward.”

The co-founders of Zephyr Mattress all have full-time jobs, working in their free time during the week and meeting on weekends.

The meetings take place virtually, said Rieb, who is based in Moscow, Idaho while Lober and Schroeder are in the Seattle area.

“Now working from two different cities, that hasn’t had nearly as much of an impact as, say, doing some of these networking events or business plan competitions and those kinds of things in a virtual setting,” he said. “When it’s just three people, I feel it’s really easy to have a conversation … but once you get to six, 10, 30, 70 people, you definitely become a dot in the room and it can be difficult to interact that way.”

Lober added: “We had to learn to connect virtually in order to tell our story.”

Team Zephyr is waiting on several grant applications, which could dictate when the founders transition to full-time with the company, hire additional staff and find more space to upscale operations.

In September, Rieb represented Zephyr Mattress at the grand opening of the Adaptive Technology Center in Spokane.

As an arm of the Steve Gleason Institute for Neuroscience, the space is designed for patients suffering from neurodegenerative diseases and their families to test out devices that could help better their lives.

Rieb said he believes the Adaptive Technology Center can be a “point of contact” for people with ALS and similar disorders to test the Zephyr Mattress once the team has developed a full-scale prototype to lend to the institute.

Whitlock-Wild, who is also the project manager for the Adaptive Technology Center, said the mattress can provide relief not only to the person living with the disease, but also the caregiver.

“If you consider a Boeing airplane and all the pieces and all the different people that have to manufacture the pieces for that airplane before it even comes together, this mattress is very similar in its complexity,” she said. “I hope that they keep pushing forward for this because I see it being a great option for families.”